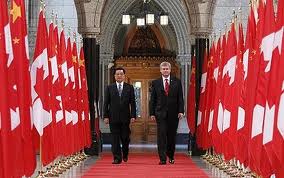 At the occasion of Canadian Prime Minister Stephen Harper’s visit to China from December 2 – 6, 2009, a MOU was signed between the two governments. Under this MOU, clean energy, especially the “cleaner use of coal, including carbon capture and storage” , has been identified as the key area of potential cooperation between the two countries. The two countries have agreed to strengthen such cooperation through policies, programmes, projects, technology development and transfer.

Under strong governments support, the potential for CCS cooperation between Canada and China are considerable. Opportunities such as technology, information and personnel exchange, two ways investment, and sourcing opportunities from China, will be beneficial to both countries to optimize CCS technology, reduce cost, thus shorten the commercialization process for CCS for both countries.

It is widely acknowledged that Carbon capture and storage (CCS) is essential to cut carbon emissions and thus mitigate the impacts of climate change. CCS is especially important to China given the coal-and-electricity relationship in the country. China is a coal-rich country and nearly 70% of its electricity is generated by coal. According to BP, China has 114.5 billion tonnes in its coal reserves, about 13.5% of the global total, compared to 2.1 billion tonnes of oil and 66.54 billion cubic metres of natural gas, accounting 1.3% and 1.1% of the world total respectively.

Till now, China has carried out a series of activities to promote CCS development. In terms of Chinese government support, some of the important programs are listed below:

Moreover it is very likely that CCS will be included in the National 12th Five Year Plan.

The Canada-China cooperation on CCS, in addition to the CO2 Injection/Sequestration in Deep Coal Seams for Coal Bed Methane (CBM) mentioned above, there is a most recent development on CCS cooperation between two large Canadian and Chinese entities.

In terms of challenges, the implementation of CCS in China faces the same obstacles it does globally: issues that arise from the costs, the storage, the risks and the uncertainties. But the coal-and-electricity relationship (nearly 70% of electricity generated by coal) in China means CCS will be a strategic choice for China in addition to the development of renewable energy. Moreover the potential huge market for CCS (3/4 of total installed capacity is thermal power plant) will also make China the largest consumer of CCS technology.

Funding from the Government of Canada is found at: